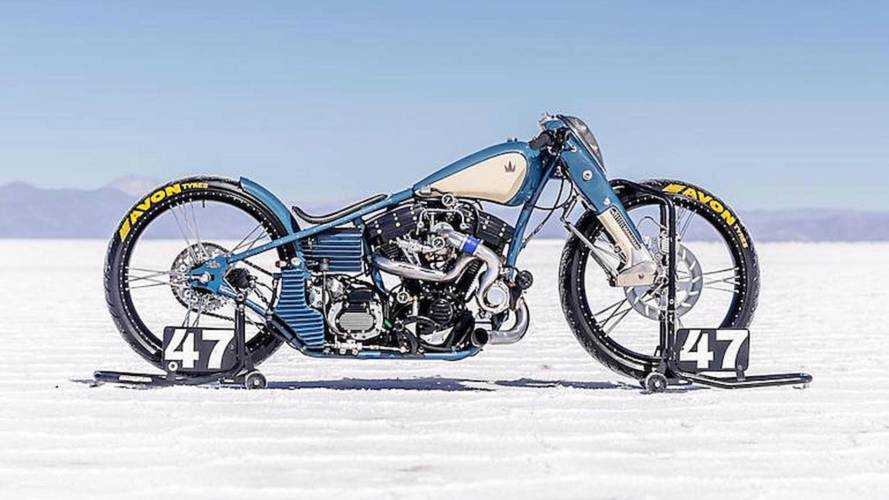 A heavily massaged and turbo-charged Harley Evo engine, a bespoke hardtail chassis, a set of forks of a Honda Dream, a 1940’s Ford headlight, and a lot more

It’s been roughly a century since board track racing was A Thing, and while board tracker builds might not be as popular today as bobbers, cafe racers, trackers, choppers, or scramblers, it’s always cool to see customs inspired by the death defying style of racing that was once America’s most popular form of motorcycle competition. This particular build comes to us from Argentina’s Lucky Custom, which built this turbo-charged Harley-Davidson custom to celebrate the outfits tenth anniversary.

Forward and rear shots of the Cheetah

Dubbed, “The Cheetah”, this bespoke board tracker build is Lucky’s 47th project and involved piecing together the entire custom from the ground up. Starting with a Harley-Davidson 1,340cc EVO engine, the American mill had its compression ratio brought up before its displacement was bumped up to 1,450cc’s using forged pistons. From there a turbocharger was tacked on to squeeze even more out of the 1.45 liter V-Twin. Unsurprisingly the blower produces a substantial amount of extra heat, so the crew at Lucky opted to fix an external oil-cooler in order to keep the rider from getting too toasty. With the new, more robust cooling system in place, the engine's cooling fins were shaved down, which gives the blown EVO engine a distinct look.

Because Lucky kicked off the build with nothing more than an engine, the frame was designed and fabricated in house. A tubular steel hardtail unit was married to a unique retro-style set of forks off an old 1960s Honda Dream. The Honda forks were widened to accommodate a bigger front wheel while the front suspender’s internals have been beefed up and slits were cut into the sides of the fork covers to expose the new springs. The top of the front-end also includes cutouts that allow the bike’s handlebars to protrude from the fork covers.

A closer look at the blown 1,450cc mill powering the Cheetah

Another noteworthy feature on the Cheetah is its headlight—a unit sourced off of a 1940’s Ford (complete with original bezel) which now sits in the boxy front end. Despite the new front end being a mix of old Honda and Ford parts, the team at Lucky did a stellar job of combining the different pieces into one cohesive-looking unit. The build’s paint scheme was also borrowed from mid-century automobiles—a white and blue livery set off with gold highlights. The white sections of paint are adorned in subtle horizontal striping that can only be seen when viewed up close.

From close up, the horizontal stripes in the white sections of the bike's livery can be seen

Next, the guys at Lucky got to work on the build’s tank. They settled on a split, two-piece fuel cell with each half bolted to the frame in an asymmetrical layout. The left tank is where gas is actually stored, while the right side is a dummy tank used t house the build’s fuel-pump, providing sufficient fuel to feed the turbo. The Cheetah also sports an oil tank and battery box that were produced in-house—both of which boast shallow-finned covers to match the rest of the powertrain.

To further the board tracker theme, a pair of massive, 23-inch wheels were selected—radial cross star 40-spoke patterned—before being wrapped in Avon rubber. The rear wheel is draped in a wide fender sandwiched between the tire and the build’s saddle. To help slow down the forced-induction board tracker, disc brakes were added fore and aft, and new foot controls were fabricated along with custom brackets to mount the new pegs and pedals.

Because the Cheetah was built to demonstrate everything the Córdoba-based shop has learned over the last decade, it’s especially cool to learn that Lucky's big boss Lucas Layum will keep this build for himself.

“What I like most about this bike is that it’s staying mine,” says Layum. “Every part of it took imagination and lots of time to fabricate. And what you can’t see in the photos is how it handles. I absolutely love it!”

The team at Lucky started with nothing more than an engine

The build’s antique aesthetic looks fantastic, a feat that was very much painstakingly done by design using board tracker style supplemented by touches of 1950s hot rod and a few hints of land speed racer. Overall it’s just an incredibly well put together build, earning it the place as this week’s Bike of the Week.

The Cheetah in action on the salt flats