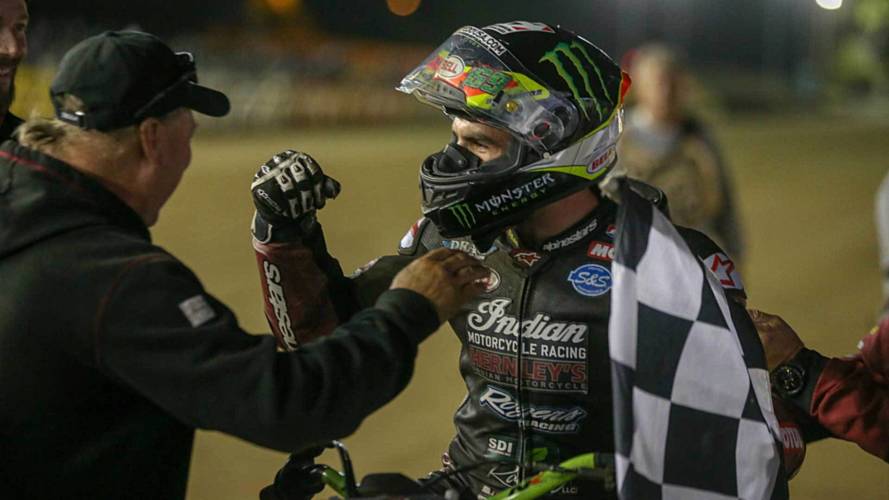 Welp, looks like Indian's done it again. Not content to just take the podium, Indian FTR750 riders took the top seven slots at the legendary Sacramento Mile on May 19, 2018. What's it like to dominate American Flat Track like Indian does? Let's let them describe it in their own words.

In typical Mees fashion, he quickly worked his way to the front and remained in the first-place position through the 25 laps. Coolbeth worked his way to third place from a challenging position, finally holding the second-place spot. Smith returned to the dirt track after breaking his left fibula during a Semi Final race at the Texas Half-Mile on April 28 and secured his best finish of the season.

“It feels great to finally get the win at the legendary Sacramento Mile. This has been a track I have desperately wanted for many years,” said Mees. “The Indian Scout FTR750 once again proved it’s the best bike on the track – this time taking the top seven spots.”

“It was another thrilling night to see all seven of the Scout FTR750s lead the board,” said Gary Gray, Vice President – Racing, Technology & Service for Indian Motorcycle. “We were impressed to see Smith make such a quick comeback and finish third after breaking his leg just weeks ago.”

Through the six races this season, Mees continues to sit atop of the leaderboard with 125 points and five wins, while Wiles ranks second with 89 points. Baker, Coolbeth, Fisher and Jeffrey Carver Jr. currently sit fourth, fifth, sixth and seventh place, respectively.

The Indian Wrecking Crew and stable of privateers aboard the Scout FTR750 will continue its season on May 27 at the Springfield Mile.