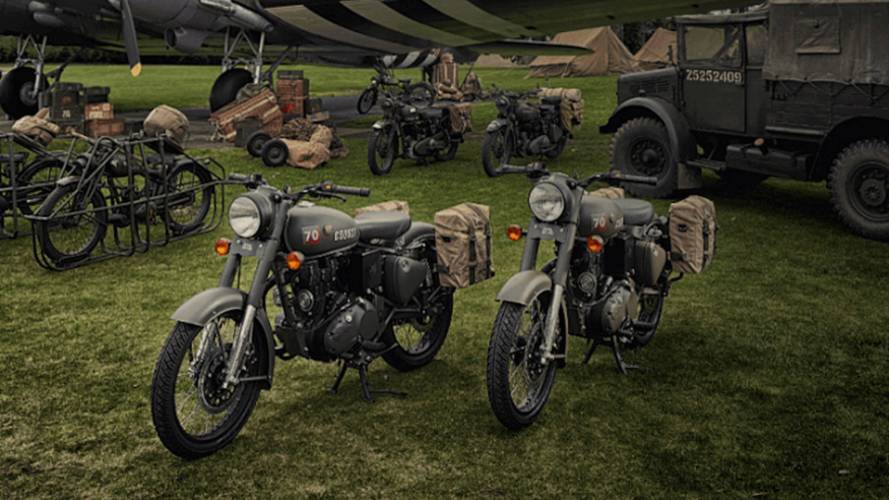 Royal Enfield is producing 1,000 examples of the Classic 500 Pegasus Edition, a model honoring the machines used by British paratroopers in WW2

A huge part of Royal Enfield’s identity is tied to its historic roots which date back over a century. For this reason it’s unsurprising to see the company highlight some of its historically significant offerings when trying to sell its modern wares. Royal Enfield recently achieved this through the release of a limited edition version of the Classic 500 honoring the the RE/WD 125 "Flying Flea". The Flea was utilized by British paratroopers during WW2 where the bike was routinely dropped behind enemy lines.

During the second World War, the War Department in the UK ordered some 4,000 Flying Fleas, many of which were dropped via parachute within protective cages in order to give military units better mobility in places a larger vehicle might otherwise struggle. Flying Fleas were even famously used on D-Day, as well as during 1944’s Operation Market Garden.

"The story of the Flying Flea is both remarkable and inspiring, and it has a history like no other motorcycle,” says Siddhartha Lal, chief executive of Royal Enfield.

As an homage to the Flea, Royal Enfield has produced 1,000 examples of what it’s calling the Classic 500 Pegasus. The new limited edition is essentially a military-themed version of the regular Classic 500, sharing the same 27.2 horsepower, air-cooled, half-liter, single, along with the same chassis, and suspension and brake hardware. Of the 1,000 units produced, one quarter will be sold in India, while the rest will be sold in the US, UK, and Australia. For some unknown reason the model won’t be released in Italy, Germany, or Japan.

Royal Enfield is offering the Classic 500 Pegasus Edition in two colors; Service Brown and Olive Drab Green. Certain regions however are limited to just one color, like India which is only getting Service Brown. Making the liveries that much color is the fact each bike boasts a unique serial number stenciled onto the gas tank, mimicking the Enfields used in The War. Furthering the Flying Flea theme are Pegasus emblems—symbols used as the official Parachute Regiment insignia—which adorn the tank and the canvas panniers. Finishing off the military aesthetic are brown handlebar grips, a leather strap with a brass buckle across the air filter, and the silencers, rims, kickstart lever, pedals and headlight bezel have all been blacked out.

Pricing is not yet available but we’ll update you when we hear something. Until then, Royal Enfield put together a legitimately cool little promo video for the new model that I highly recommend giving a quick watch.