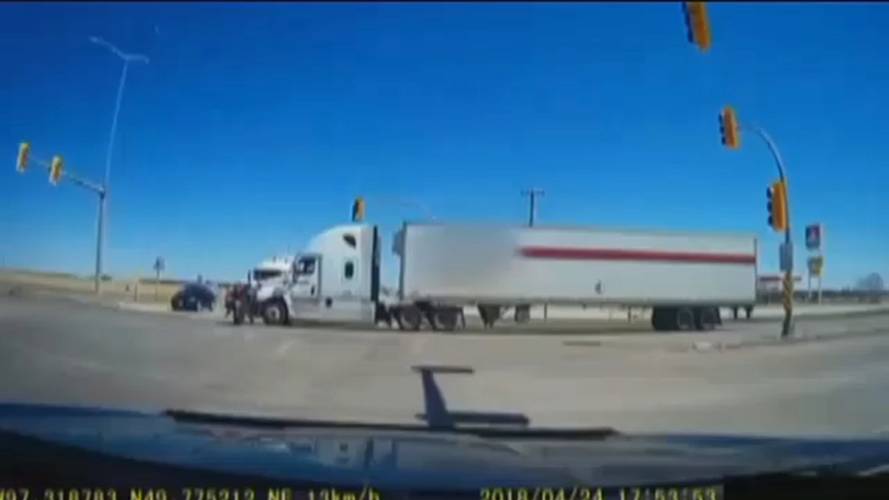 Assuming other vehicles on the road are going to obey traffic signs and lights is a recipe for disaster. While the majority of cars won’t run red-lights and whatnot, it only takes one distracted, drunk, angry, or apathetic driver to put a violent and immediate end to your ride. One Canadian rider recently got a firsthand reminder of this when an 18 wheeler blew through a light and collided with his motorcycle.

According to RCMP Media Relations Officer Tara Seel, the incident took place around 1PM on April 24, 2018 in Oak Bluff, Manitoba, Canada—just outside of Winnipeg. A police officer was on routine patrol when their cash cam caught one of every biker’s worst fears on tape; a collision with a semi truck. The footage starts with the cop waiting at a red-light. When the light changes, 35-year-old rider, Rob Selby takes off from the front of the cue before noticing an 18 wheeler running a red-light and entering the intersection from his right. Despite Selby grabbing a big handful of front-brake, it was too late, sealing his fate.

The driver of the truck—a 50-year-old American who was reportedly hit with a $407 fine for distracted driving and blowing through the light—appears to realize his mistake, albeit also too late, and slams on the brakes as well. The bike still careens into the side of the truck’s massive, front-left wheel, sending the smaller vehicle sliding to the left. The good news is the Selby was able to hop to his feet right after the crash, (with the help of adrenaline) only suffering minor injuries.

“(The) first sort of thing you do is you start just running your hands over yourself and making sure everything is still attached,” Selby tells CTV Winnipeg. “I of course assumed with the red light that he (the driver) was paying attention.”

Well like they say, “When you assume, you raise the likelihood you’ll get hit by a semi”. The investigation into the collision is still ongoing too, and the driver could be facing additional charges. Multiple witnesses at the scene have stated that the unnamed semi driver was talking on a cell phone when he ran through the red-light. Incidents like this have prompted government in Manitoba to push for harsher punishments for distracted driving, and back in March legislation was introduced that would dull out automatic three-day license-suspensions for drivers caught using phones (or other handheld electronic devices) while behind the wheel.

“We really can’t shut the door on adding more penalties, adding more deterrents, until the problem is 100 percent fixed,” says CAA Manitoba Public and Media Relations Specialist Erika Miller. “At the end of the day, we are looking at a culture shift.”

This sentiment isn't limited to just Manitoba though. In the last two weeks five motorcyclists have been killed in Alberta, prompting everyone from law makers to motorcycle safety advocacy groups to push for for campaigns to make drivers more aware of the bikes they share roads with. While this last tidbit is anecdotal, you may remember  Ewan McGregor and Charley Boorman's show, Long Way Around, in which the duo trekked from London to New York on motorcycles, during which their only accident was in, you guessed it, Canada.

VIDEO OF THE YEAR: Rider slides under moving semi, walks away unscathed

With the media attention brought on by the dramatic footage, Selby is using the opportunity to try and raise awareness about the dangers of distracted driving, pointing out that his brush with death could have ended far more tragically. Though in the same way the driver of the semi should have been paying closer attention, I’d argue that Selby—who I am genuinely glad was unharmed in what could have easily been a fatal collision—should have also been more aware of his surroundings, surveying the perpendicular traffic. Drivers—especially those of 80,000 pound 18 wheelers—need to stay frosty while behind the while, but so do bikers.

This video serves as a good reminder to always be aware of your surroundings and to always ride defensively. Whether or not we’re at fault in an accident, as motorcyclists, we’re still the ones who bare the physical consequences of a collision. Assume drivers don’t see you, assume cars are going to run red-lights, unexpectedly swerve into your lane, etc. Like they say; expect the worst, hope for the best.