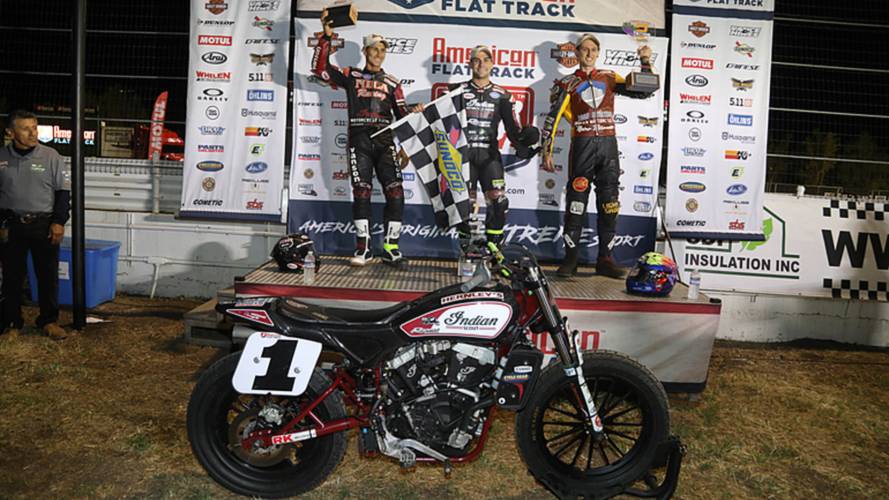 Indian Motorcycle Racing's unstoppable Wrecking Crew and a couple of hard-riding privateers swept the podium at this year's Calistoga Half-Mile.

Looks like it was a pretty good weekend for Indian and its monster FTR750 flat tracker. A combination of Wrecking Crew great Jared Mees and a handful of dedicated privateers dominated the field at 2018's Calistoga Half-Mile on Saturday, May 5. So much so in fact that Indian racers took the top three spots in what was a great evening of flat track racing. We'll let Indian tell you the details in their own words.

Through the first few laps of the Main, Mees worked his way through traffic, ultimately passing Carver rounding a turn. Carver remained close behind and made several passing attempts in the final laps. Mees held on to edge our Carver and place atop of the podium yet again.

“Following a third-place finish in the Semi, we made some slight adjustments before the Main,” said Mees. “It worked out well, and we were able to hold off Jeffrey. He was running fast all night. We’re stoked to come away with a win here, and look forward to the first mile of the season next weekend in Arizona.”

Indian Motorcycle finished with seven Scout FTR750’s in the top 10, including all top five positions. Wrecking Crew rider Brad Baker bounced back after suffering a minor concussion in Texas with a strong fourth-place finish. In his first race on the Scout FTR750, privateer Davis Fisher locked in the fifth-place position.

“It was an exciting night of racing, with a number of Scout FTR750 riders running fast,” said Gary Gray, Vice President – Racing, Technology & Service for Indian Motorcycle. “It was pretty cool to see Davis place in the top five in his first race on the FTR750. Coolbeth made some impressive passes to get to third, and Carver sure gave Mees a run for his money. I think this is a taste of what we all can expect over these next several races in Arizona, Sacramento and Springfield.”

Through four races, Mees sits atop of the leaderboard with 75 points, while Indian Motorcycle privateer Henry Wiles ranks second with 58 points. Coolbeth and Carver each have the fourth-most points with 53, while Baker has totaled 42 points. Bryan Smith continues to recover from a broken left fibula suffered last week in in Texas. He will be miss next weekend’s race in Arizona, but is hoping to ride at the Sacramento Mile on May 19.