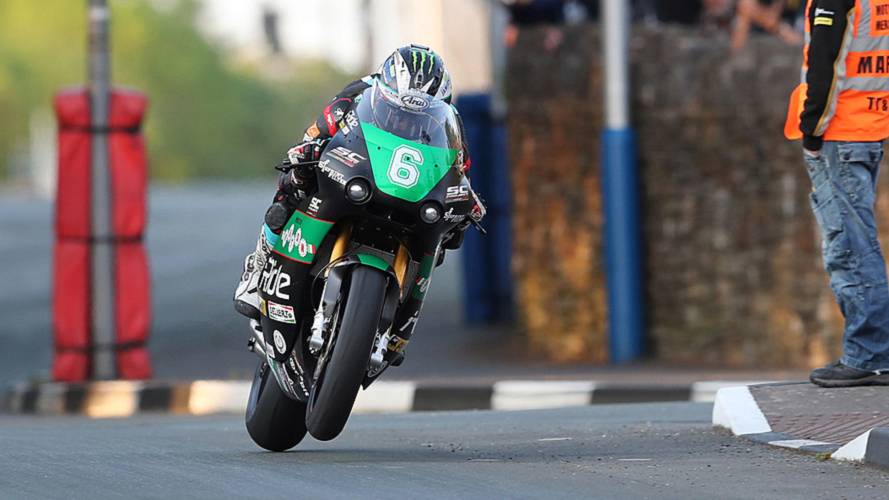 Saturday's Isle of Man TT practice shows a promising start to this year's racing on the island.

Practice started on the Isle of Man on Saturday, though it was a bit delayed due to an oil spill on the course between Cronk ny Mona and Signpost Corner; when dealing with a race course made from public roads this is not uncommon. As is typical, the rookies (Adam Lyon, David Jackson and Davey Todd) were led around for the first lap by an old hand at the course, Richard Quayle, though Jackson's bike didn't even finish that first lap. Then the real practice began with Supersport and Supertwins riders taking the course in anger.

Dean Harrison, having only recently set a record at the Ulster Grand Prix, had the fastest recorded supersport lap; 125.8 miles per hour on a  Silicone Engineering  Kawasaki 600 Ninja. Only a blink of an eye slower was Michael Dunlop, at 125.7 on the MD Racing  CBR600. Third fastest was Manx native Conor Cummins, who actually was the quickest for his first two laps, ultimately going 125.2 mph on his Padgett Racing Honda.

Amazingly, that was not enough for Dunlop, and he came in to switch to his Lightweight Supertwins Paton, setting a time of 120.9 mph which would have been a lap record if done in a race. For those of you not familiar with the Paton name, it is a resurrection of a boutique Italian brand, wrapping Kawasaki Ninja 650 motors with a bespoke twin shock chassis and trellis frame. Irishman, Ivan Lintin, ended up second fastest at 120.7 mph, but at one time was turning laps 23 seconds faster than the next Lightweight rider, on an RC Express Kawasaki Ninja 650.

GET TO KNOW THE ICONS: Joey Dunlop Documentary

There was one rider crash, with Masayuki Yamanaka of Japan going off course at Whitegates. He was airlifted to Nobles Hospital on the island, but discharged with just a minor ankle injury. There is no news if he will return to race.

At the end of the day the sidecar class rookies, who take the insanity of the Isle of Man TT to a whole other level, went out and did their paced introductory lap. There is no official practices held on Sunday, but the riders will be back at it Monday evening, with the Superbikes going at it, along with the Supersports and Supertwins.