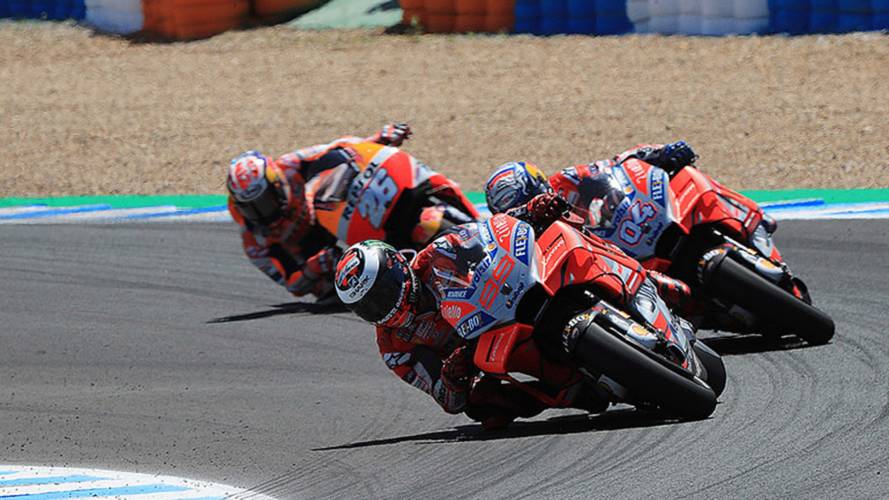 According to Lorenzo and Pedrosa, the multi-bike collision at the Jerez MotoGP race involved the "three cleanest riders” in the category.

The multi-bike collision in the MotoGP race in Jerez involved the "three cleanest riders” in the category, Jorge Lorenzo and Dani Pedrosa have claimed

The crash occurred on lap 18 on exit of the right-hand Dry Sac corner, and eliminated Pedrosa, Lorenzo and Lorenzo's Ducati teammate Andrea Dovizioso as they fought for second place behind eventual race winner Marc Marquez.

Dovizioso had lunged down the inside of Lorenzo on corner entry and both ran wide, with Lorenzo crossing over to the right of the Italian to retake position.

But this led to him clashing with Honda rider Pedrosa, who was by then on the inside of the corner and was sent airbourne, while Lorenzo himself lost control and collected his teammate.

“The images are clear, but to be honest I don't want to speak too much about that or to say 'it is your fault or your fault' because we are the three cleanest riders in the championship,” Lorenzo said after the race.

“It was very unlucky movement for both of three, and we finish on the ground and we are never this type of actions.

“Everything happened like domino pieces, very unlucky for all three – especially for Ducati and Andrea, who fight for the championship.”

Pedrosa echoed his sentiment, saying: “It happened to three of the most clean riders of the grid, so it was not really something that happened because we want it to happen or because we act in this way.

“I think the three of us were doing a very good race and we all deserve to finish in very strong positions today.”

However, the two riders seemed to have different viewpoints on who bore most of the responsibility for the crash itself.

“The thing is that Jorge cut down from Dovi after the pass and he wanted to recover his position and maybe he didn't expect me there from some reason,” Pedrosa said.

“What I can say is that in that moment, there is one point that I'm watching them going wide, but then I start turning and I am completely on the right side of my bike and I can't see anything.

“Lorenzo was leaning on the inside, he can more or less see me, and because also I think when you go out and you lose the line, you must check to recover the line.”

Lorenzo, for his part, said he “obviously” did not see Pedrosa before the crash, and hinted that, as the third rider in the group, the Honda man “has to be responsible”.

“The third rider is the only one who has vision of the situation because we don't have eyes on the back of your head,” he said.

“I would like to ride with four eyes but not possible. is the one behind who has to be responsible but anyway is Dani.

“Dani, myself and Dovi never are in this action so I don't want to say .”