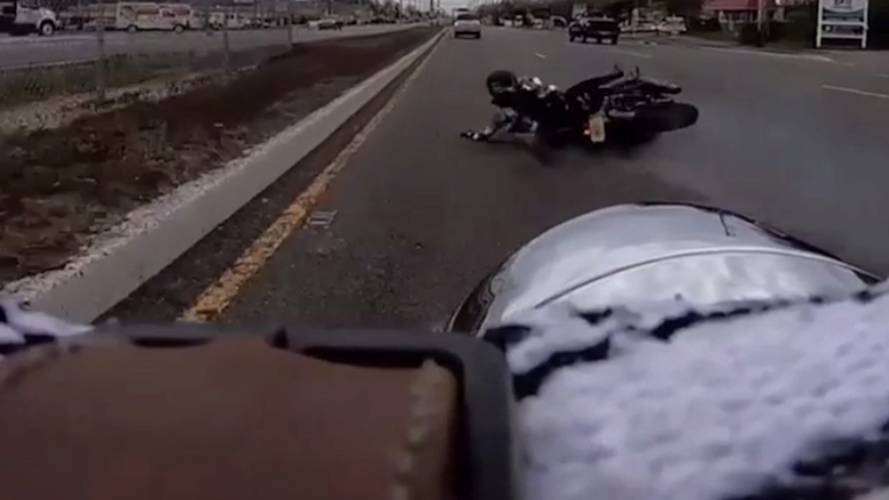 Heavy weight cruisers are no match for deep potholes when traveling at freeway speeds, as this new video from New Jersey so clearly demonstrates

Gravel, oil slicks, and other road debris are common dangers for motorcyclists. What about potholes though? Well, spoiler alert, they're just as dangerous, if not more so.

On the afternoon of May 4, 2018, Kevin Fries and Leeza Ziemski were out riding their Harley-Davidsons along Jersey's Route 37. Everything seemed normal—The couple was riding in a staggered formation and they left a decent gap was between the bikes. This is good practice, because it allows for ample time to react if something goes awry. As is often the case, something totally went awry.

While approaching an intersection, the riders encountered some sketchy pavement. Within a second or two of the road becoming rough, Ziemski hits what appears to be a pretty deep pothole which bounced her Harley into the air and tossed her off of it. Making matters even worse was that Ziemski went one direction and her bike went the other, giving her boyfriend very little space to fit through without clipping his girlfriend or her bike. Swerving to miss Ziemski, Fries careeed into the curb.

"I had been riding on the left side but I switched sides because there were so many bumps," Ziemski explained. "After seeing that video, I know I got very, very lucky."

One second everything is going fine...

“I saw her body go in the air and the bike lift up in the front. Once I saw her a foot off the seat I knew she would go down,” said Fries. “I thought I was running over her for sure. Reaction time was on my side. She went to the left and the bike went to the right. I saw her head very close to the tire. My foot's all swollen and bruised. Everyone and their mother got out of their cars to see if we were OK."

Both Fries and Ziemski plan to recover and then get back on the horse, though Ziemski is hoping she’ll get some compensation for her thrashed Harley.

"The whole front of my bike is just mangled,” say Ziemski. “The forks, the handlebars, shocks, clutch, shifter, sissy bar, visor, wheel, Speedometer, foot peg, gas tank, are damaged. Once he gets into a shop, there will most likely be internal issues that we find."

On a post to Instagram Fries refers to Route 37 as “a sea of potholes”, and unsurprisingly this isn’t the first time attention has been called to route 37’s less than stellar maintenance. In fact, there was already been various efforts to try and get the local Department of Transportation to fix the rough section of road that is Route 37. Lucky Ziemski was left her with scrapes, bruises, and an arm injury following the spill. But the footage shows as a pretty clear reminder of just how much of a threat potholes can be to motorcyclists.