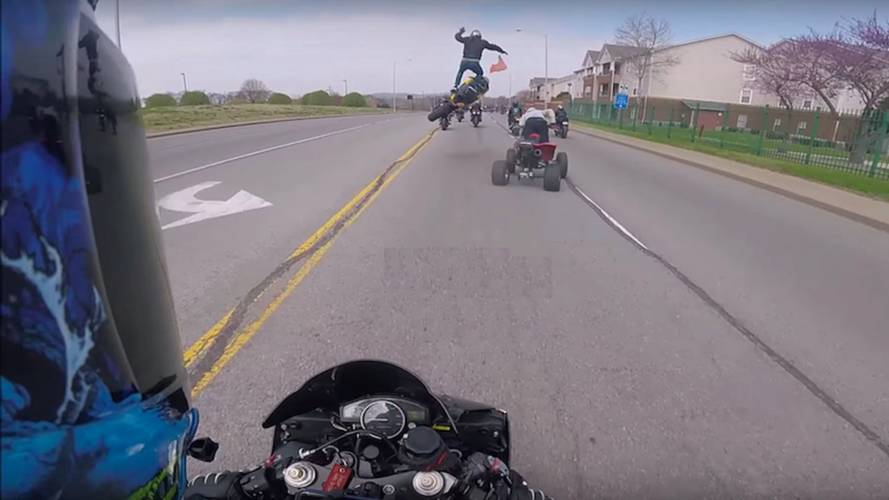 Yet another reminder of why always having cameras around leads to some Hollywood worthy footage such as this recent accidental motorcycle jump.

One major effect of the popularity of GoPros and other action cameras, is that crazy freak occurrences are being caught on film more than ever before. Whether its sliding under a moving semi truck, or escaping a multi-car pileup by grabbing onto a moving car’s undercarriage, the omnipresence of action cams means we get treated to some pretty epic videos on an increasingly frequent basis. This one's definitely in that "you have to see it to believe it category".

The three-and-a-half minute clip starts with a group of riders leaving a parking lot and heading out into the street. The video is being filmed from a Yamaha R6 pilot’s helmet-mounted camera, which captures the more than dozen motorcycle and ATV riders in the group embark on their ride. As the group makes its way down the street, the video approaches the 30 second mark, which is where things get very interesting.

A guy on a black and yellow Gixxer opens the throttle and guns it, just as an ATV rider veers into the path of the Suzuki. The GSX-R accelerates so quickly that the bike’s front wheel briefly leaves the ground, just prior to when the two-wheeler makes contact with the aforementioned ATV. Somehow the Suzuki’s front tire hits the four-wheeler’s back, left wheel which the Gixxer somehow bumps off of, using the tire and its fender—which is torn off in the accident—as an impromptu ramp, sending both the rider and his supersport high into the air.

The moment of impact...

The Suzuki pilot has enough hang time to kick the machine out from under him before plummeting to the unforgiving tarmac. Both vehicles in the collision appear to have at least suffered some pretty major cosmetic damage, though the rider reportedly escaped with little more than broken ankles and a sore neck—though obviously things could have ended far worse for both parties involved.

This video serves as a pretty crucial reminder to practice proper group riding etiquette. Ride in a staggered formation, don’t cut in front of other riders, maintain an appropriate distances between bikes, etc. If you want to know more we got you covered, check our official How to Ride in a Group piece.