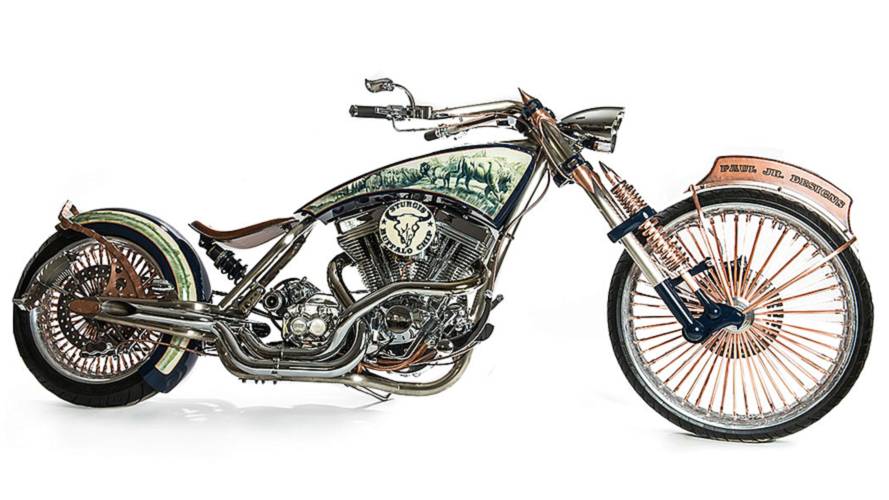 Paul Jr is back and he brought with him more chopper ideas, including this striking Sturgis Buffalo chip steampunk beauty up for charity auction.

Fans of choppers behold, this Paul Jr Designs Custom could be yours!

You probably remember all the yelling and the drama the most, but there’s no denying that the choppers that rolled out of the Orange County Choppers shop were unique, maybe even works of art. Despite leaving us feeling like falling apart was always only an insult away, the Teutuls managed to hug it out by the end of each tensed episode… until the actual falling out in 2008. But with his eye for design and a name that now resonated, it’s no surprise that Paul Jr went on to create his own shop, now featured on American Chopper, and that his team still rolls out gorgeous bikes. The first one of the series reboot is no exception.

LIFE AFTER THE OCC: Where Are They Now? OCC’s Vinnie DiMartino

For the relaunch of the American Chopper series earlier this week, Paul Jr’s team worked on a striking Sturgis Buffalo Chip-themed custom, the famous entertainment ground in South Dakota where music and motorcycles come together to mingle.

The result is a retro, steampunk-looking motorcycle with a level of detailing that will make any fan swoon. The gas tank is painted in a navy and green paint scheme with bison scenery on both sides. The look is completed with copper colored wheel spokes and suspension and a leather saddle. At its center, a 1,700cc Ultima block propels the beauty with 115 horsepower and 120 pound-feet of torque.

For stretched out wheelbase and ape hangers aficionados, the work of OCC and Paul Jr Designs’ shops is the equivalent of a car enthusiast dreaming of a Ferrari California on a $40,000 salary: it’s what dreams of made of. But only dreams. Except for this time: you could have a chance to ride around your very own Paul Jr custom.

SPREADING THE CHOPPER LOVE: Twin Rivers Chopper Camp Out: A Weekend with 200 of Your Closest Friends

The Sturgis Buffalo Chip chopper will be auctioned off at the Legends Ride auction on August 6th. Money received during the auction will be donated to local charities, in the Black Hills of South Dakota. Any diehard fan of the series, of choppers or of both won’t want to miss their chance. The rest of us can sit back and appreciate the show. Do you miss the yelling yet?