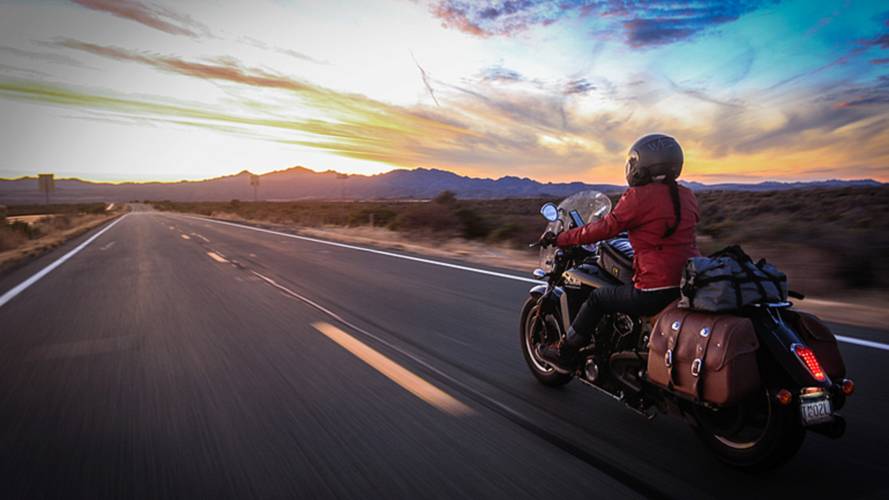 Justin and Kyra took a trip to the Grand Canyon on New Years Eve a while back and discovered just how cold it can get in the high desert.

Justin reminisces about a rather cold ride to the Grand Canyon

It was only 233 miles, a trip Google said would take something like three hours and thirty-five minutes. Cake for us kind. After averaging a cool 350 miles per day for weeks, maybe months on end, the idea of riding from Phoenix to the Grand Canyon on New Year’s Eve was a discernible ‘duh’ from the both of us. Up the Interstate, through the Coconino National Forest and Flagstaff, a jaunt along Highway 89 N, then an abrupt left onto 64 West where we’d ride along the southern edge of the Big Hole before arriving, earlier than expected, at our accommodations just south of Grand Canyon Village. Or that’s what we had in mind.

Leaving Phoenix and heading anywhere is always a game of ‘what to wear.’ A simmering, lower-bits-boiling 90 degrees in the valley, can quickly become near freezing when you climb a few hundred, er, thousand feet in elevation. This trip, however, we did our research. It was going to be NYE after all, and all the idiots would be out in force—us included. What better way to ring in the New Year than to look upon a vast expanse that’ll make you feel infinitesimal, useless, and incomplete? Ha! It was more like a good excuse to get out of town and take a motorcycle ride. Famous last words for those that prefer good times over comfort and convenience.

Our research included the obvious ‘Grand Canyon weather’ query, which resulted in a "real, real cold" reply from the Google. Great. Kinda saw that coming. So we layered up. Those thin base and merino wool mid-layers and then whatever comes after mid? Jackets and balaclavas and the warmest gloves we could muster. Long Johns and tall socks. Basically everything we had in our closest that wasn’t perforated. Afterward, we threw legs over saddles and headed north to Flagstaff. We had lunch in town and then rethought our route, choosing instead to traverse the state westward towards Williams, and then grab the 64, only this time Northbound, because Kyra had found something. Something… prehistoric!

Oh wow, the new Kawarocky everyone is talking about!

‘Bedrock City’ opened in 1972. Themed after the hit cartoon television show The Flintstones, the park licensed the likenesses of Flintstones characters. It features statues, rides, and a diner based on that theme. It’s also an RV park and has a rather large gift shop, where I purchased one of those sparkly Grand Canyon stickers. To be honest, I’m not entirely sure what enticed us to this once bustling theme park. We do have an affinity for things long forgotten, but this was a little too new for our typical wanderings. That being said, the park was a wild imagination’s wonderland, allowing us to ‘wonder’ at all the rides and themed structures strewn about the park. We tried to take the train ride, but I think the conductor was intoxicated? We left with some ridiculous photos and a smile on everyone’s face. Next stop? The Giant Crevasse!

Here’s where things get good. Or terrible, if you’re me and my appendages.

The remainder of our ride—from Bedrock City to Grand Canyon Village—was uneventful at best. We checked into the over-priced accommodations we’d booked, dropped bags in our rooms, and then made the most crucial of errors: we presumed. It was a solid sixty-ish-degrees at the moment… How cold could it get?

If you haven’t seen the Grand Canyon, well, then you haven’t seen it. Words and photos and drunken uncles Christmas stories don’t do it justice. It really is incredible. In all the ways your Aunt Denise described. Big and bold and beautiful. An existential offering unlike anything else in the United States. A goddamn giant hole that only time and erosion could create, making the viewer feel foolhardy for thinking they mean something, make a difference, or should give a damn. Or maybe this was the cold talking. Because it was becoming such. Cold. Really cold.

My mother and her husband had done the smart thing: car. They were wearing what amounted to alpine equipment as far as I was concerned. We, on the other hand, were clad in mid-winter riding kit, having left the ‘it’s going to be really cold’ stuff at our hotel. Idiots, I know. So, as the sun set over this Holiest of Holes, we watched, photographed, and then realized just how dumb we were. The temperature? 31 degrees Fahrenheit and dropping.

Hard to do this justice with a camera.

From the edge of The Humongous back to our hotel was a short, unflattering distance on a decent day. At below freezing temperatures though, it turned into the worst ride of my young, and clearly dumb, life.

When your fingers freeze, like really freeze, it’s hard to imagine a pain that might be worse. Not razor blades, because that would be swift. Not a blowtorch, because that would be abrupt, and, uh, hot. Instead, the feeling of fingers free of blood, left to freeze across the handlebars of a motorcycle is like a slow, consistent kick to the abdomen. Just enough to take the wind out of you, without putting the brakes on completely. To be fair though, I have terrible circulation and suffer from Thoracic Outlet—the result of a youth spent playing ice hockey. So, the digits go numb almost immediately. Then the pain, and lack of function, and that feeling of ‘screw it all.’ Which is the worst, and the most dangerous of feelings. Because ‘screw it all’ on a motorcycle means certain doom. Death, maybe.

We pulled on everything we had brought with us, which wasn’t much. Gloves and a spare shirt I’d left in my mom’s car, then battened down the proverbial hatches before setting out. For a ride that would be, in its entirety, some 6.6 miles in total. But we encountered a detour. Slow rolling RVs, and then family filled SUVs, and then, “what the hell is taking everyone so long!?” Our outrage echoed across the Epic Erosion, offering a note of agony for those who were listening. We persisted. We idled. We waited. Then, when the lights got green and the trembling motorhouses got to moving, we regretted. Because, at 28 degrees Fahrenheit a wind chill, any wind at all, is absolute torture.

When we walked into our hotel room some thirty minutes later, the pain emanating from my fingers nearly set me on my ass. I’d played this game my whole life—first ice hockey and later when I decided surfing in the Pacific Northwest was a great idea—so, I knew what to do. Warm water, not hot, for as long as it took to thaw my digits. I danced in the hotel room, holding my fingers under the faucet. Why? Why did we decide to do something so dumb? For the view, for the box checked or line crossed in that proverbial book? No. It wasn’t until the next morning that I understood the whole thing. When we rode east along Desert View Drive, then set ourselves south and waited for the sun to dip below the horizon, again, casting one of those Arizona sunsets that you’ve only seen, if you’ve seen it. That was when I knew why, why we’d been so dumb, so bold. It’s because we forget so fast, and love so long. And relativity is a hell of a drug.