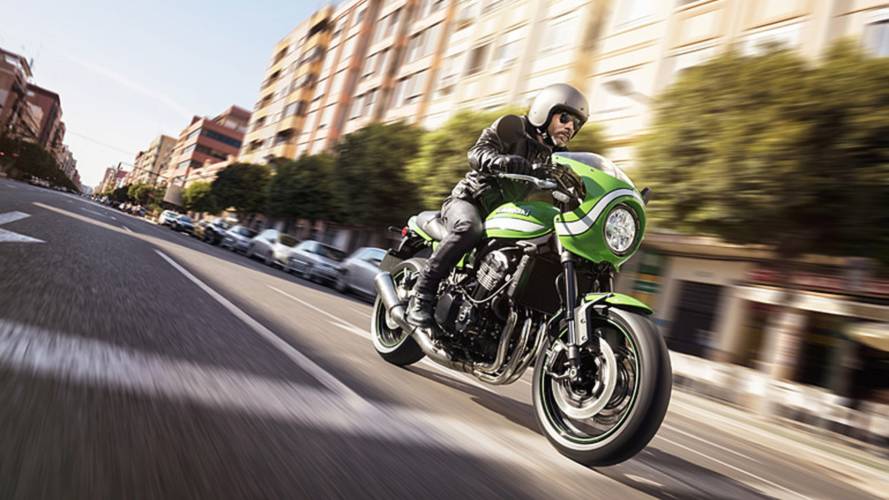 Kawasaki announced that it is bringing the extremely cool Z900RS Cafe to North America and we can all now finish our Mad Max cosplay outfits.

After a bit of will they/won't they, Team Green decides to bring its retroed-out retro to American shores

When we talked about Kawasaki's Z900RS Cafe last November, we were pretty excited about it. Then we learned that it was only going to be available to our friends overseas, and we were devastated. We had a pretty good cry about it here at HQ, then kinda forgot about it because it made the pain easier. Looks like we can dry those tears now though, 'cause Kawasaki finally decided to bring it to the States (and Canada).

CHECK OUT: Kawasaki Gets Meta and Unveils the Z900RS Cafe

The Z900RS Cafe looks the business with that bikini fairing and blacked out drivetrain.

The limited edition 2018 Z900RS Cafe is the latest addition to Kawasaki's retro stable. It features the same 948cc inline four, six-speed trans, fancy pants clutch setup, trellis frame, and suspension as the Z900RS. It's tuned for low-mid range power “delivering strong torque that facilitates control for riders of all skill levels” according to Kawasaki. The bike also comes with Kawasaki’s own branded traction control which they call KTRC and has two performance modes for whatever your riding needs, or there's always "off" if you're trying to do a burn out.

Just look at that stripe.

Instead of the R900RS's clean, unadorned lines, the Cafe sports a sexy café racer-style cowl and stepped seat, black drop-style handlebars, a brushed finish on the silencer, and some other retro-adjacent bits and bobs to solidify the look. It's only available in a beautiful vintage lime green paint job with a white stripe but we can't see anyone wanting any other color in this styling. This bike is aimed at the rider in search of a well-rounded ride with all of the modern conveniences without sacrificing heritage and style. It looks like a historical piece of the Kawasaki puzzle and we definitely wouldn’t mind being seen riding that vintage green around town.

CHECK OUT: Up Close and Personal With the Kawasaki Z900RS

With its killer engine, six-speed trans, and sporty suspension setup, the Cafe backs up its retro good looks.

The old-school fairing gives the bike a definite presence.