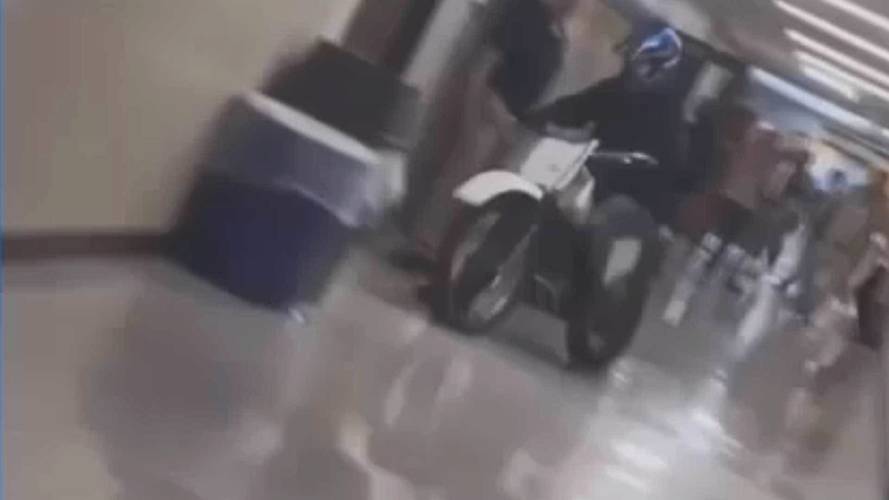 Add "riding dirt bikes through the halls" to the list of things we apparently can't do in school...

The high school senior prank is a beloved rite of passage with a long and storied history. When I graduated high school roughly one million years ago, our prank was to pick up the principal's car—a pristine 60-something Volkswagen Type 14 Karmann-Ghia—and place it in between some concrete bollards where it couldn't be driven out. It only took about eight burly dudes to lift and carry, nothing was damaged, and we all had a good laugh about it afterward.

Watch A Squid Stunter Crash Into A Cop

Since things are more radical and extreme nowadays, The Youths aren't content to just move the principal's car or stampede pigs through the halls (what up, rural central Ohio upbringing?) anymore. No, they gotta go and do things like riding a dirt bike through a crowded school hallway to get their laughs. This is exactly what happened at Roxbury High School in Roxbury Township, New Jersey, on Tuesday, June 5, 2018.

According to News12, an unnamed student shattered the school's morning calm when he fired up a dirt bike around 11:30 a.m. and went tear-assing through the hallways. Since we live in the future, fellow students were right there with their cell phones to get us some pretty good footage of what authorities call a simple high school senior prank. Our man only got a few minutes of ride time before school safety officers corralled him, yanked him off the bike, and led him out in cuffs. The student faces charges for disorderly conduct and, since he unfortunately clipped a schoolmate during his ride, simple assault.

Now since I'm a grown-ass man and a father of two, I'm officially required to disapprove of these kinds of shenanigans. That said, the defiant, anti-authoritarian, hooligan teenager that still hides in my heart definitely gave this kid a high five on the down low. Also, hey, at least he wore his helmet.